45 Yearly Graduations
$82,700 Median Salary
$80,755 Median Debt
There are 9 schools in the United States where you can get your doctor's degree in MIS. In recent years, the majority of the students getting degrees in this area were male, and 56 were from an underrepresented racial-ethnic group. Also, 2.2% of MIS graduates were international students.

In 2019-2020, 45 doctor's degrees were awarded to MIS majors. This earns it the #12 spot on the list of the most popular doctor's degree programs in the nation.

The following table shows the number of diplomas awarded in MIS at each degree level.

The median salary for graduates holding a doctor's degree in MIS is $82,700. However, this can depend on a number of factors, such as where you live and the number of years experience you have. A better approximation of salary is to look at the typical range of salaries. In this case the low is $82,700 and the high is $82,700.

The median student debt for graduates holding a doctor's degree in MIS is $80,755. The length of time it takes you to graduate and what college you attend can affect this number quite a bit. The chart below shows the range of accumulated debt loads. On the high side of the range, $89,786 is the debt load, and the debt load on the low side is $71,723. 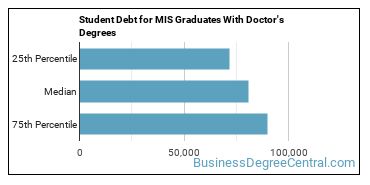 Those students who are paying back their debt on a 10-year repayment plan have a median monthly payment of $941.

More men than women pursue doctor's degrees in MIS. About 60.0% of graduates in this field are male. 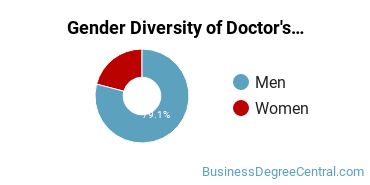 The racial-ethnic distribution of MIS doctor’s degree students is as follows: 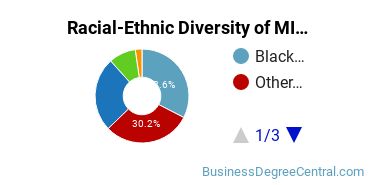 There are 9 colleges that offer a doctor’s degree in MIS. Learn more about the most popular 9 below:

Below are some popular majors that are similar to MIS that offer doctor’s degrees.