12 Yearly Graduations
17% Women
17% Racial-Ethnic Minorities*
A basic certificate in economics is offered at 18 colleges in the United States. This degree is more popular with male students, and about 17% of recent graduates were from an underrepresented racial-ethnic group. Also, 8.3% of economics graduates were international students.

The following table shows the number of diplomas awarded in economics at each degree level.

We are unable to calculate the median earnings for economics majors with their basic certificate due to lack of data.

We do not have the data to estimate the median debt for this class of people.

More men than women pursue basic certificates in economics. About 83.3% of graduates in this field are male. 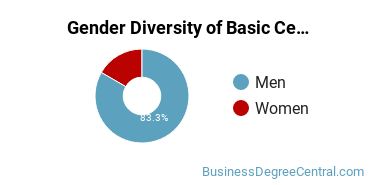 The racial-ethnic distribution of economics basic certificate students is as follows: 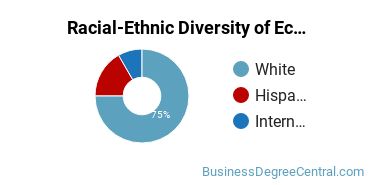 There are 18 colleges that offer a basic certificate in economics. Learn more about the most popular 18 below:

The most popular school in the United States for economics students seekinga basic certificate is University of Massachusetts Amherst. Roughly 31,300 attend the school each year. The average in-state tuition for full-time undergraduates is $15,791 per year, while in-state graduate students, on average, pay $14,014 per year.

For the 2018-2019 academic year, 8 basic certificates were handed out to economics majors at UMass Amherst. Around 12% of these students were from an underrepresented racial-ethnic group, and 25% were women.

The 3rd most popular school in the country for economics majors who are seeking their basic certificate is University of Wisconsin - Eau Claire. The average in-state tuition for full-time undergraduates is $7,361 per year, while in-state graduate students, on average, pay $8,027 per year.

The economics program at University of Wisconsin - Eau Claire awarded 1 basic certificates during the 2018-2019 school year.